The Truth of the Cards! 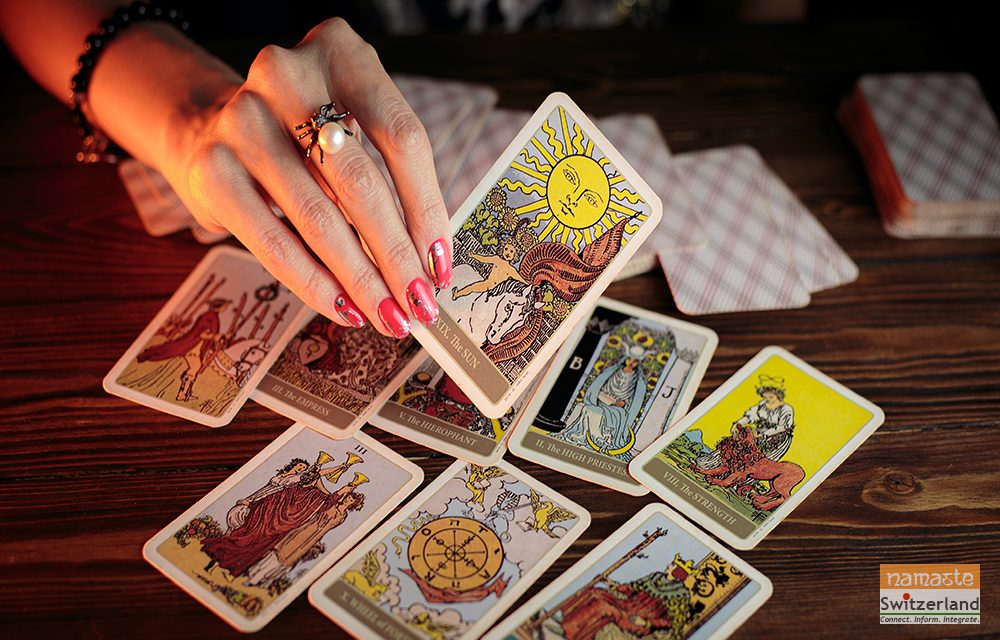 The lady, her face barely visible through the thick lace veil, turned the card over to reveal a picture of a skeletal figure, looming within a black robe. Underneath, it simply read ‘death.’
I was not proud to admit, but I shivered at that. I didn’t really even believe in all this tarot nonsense, but seeing death drawn at your very first reading was bound to get anyone feeling slightly uneasy. The tarot reader, Maya, chuckled at the expression on my face. I cast her a look I hoped was murderous. She simply smiled with amusement and spoke, “That never gets old. The look on people’s faces when they are dealt this card for the first time. It’s actually a very misunderstood card, you see. It does not mean literal death. It simply means your life is about to encompass change, a substantial change. It might require some sacrifices, but it’s usually for the best, really. You know, the card you really don’t want to get is the three of swords. That usually signifies a lot of pain, especially of the heart.”

That calmed me down significantly, though I had to remind myself I didn’t really believe in any of this. I decided to voice this fact.

“Oh, you’re a sceptic, are you? Those are my favourite.”

I didn’t reply and got up to leave. The reader seemed unfazed by my sudden urge to go and just waved me off jollily.

Once I was out of the dim, candlelit room I had been in, I felt myself relax. Lily, my friend whose idea this had been, looked up at me and asked me how it had been. I gave her an anecdote of my short encounter with the tarot reader Maya, including the bit where she mentioned the three of swords.

“As if I’m ever going back for a tarot reading, let alone getting a three of swords and it actually manifesting in my life,” I ended.

Lily, who had always been slightly more gullible to things like this, looked slightly concerned. “You’re sure death isn’t a bad card to get?” she asked. I rolled my eyes at that, thinking it didn’t matter anyway.

A few days afterwards, when I was at work in my little bookshop, I got a call from the engineering company I had been dreaming of joining since I was sixteen. It turns out they head liked the interview I had given, and I had been offered a job. It felt as if my dream of becoming a top-level engineer was finally within my grasp. Then I realised where I was. I was in the little bookshop I had worked in for years, with a small but incredibly loyal group of staff that felt like family. I didn’t want to leave them behind.

Then again, I had been chasing this opportunity for years, surely, they would understand if I left?

The goodbyes were not easy. There were tears and promises both parties knew they would not have time to keep. Most of all, there was Lily, waving me goodbye as my very last shift at the bookstore ended.

With my head held high, I joined the company. Immediately, I was given an immense workload that made it impossible to fit anything else into my schedule.
Weeks passed, and eventually, the quantity of work died down a bit. Lily had been complaining I never had any time left for her, what with my new job, so I took this opportunity to spend some time with her. Though I was against it from the start, she somehow convinced me to get yet another tarot reading done. So in I went, back into the tiny, dim room lit with candles, filled to the brim with colourful cushions, a rectangular table in the centre, a barely visible lady on one side, and a reluctant me on the other.

This time, I got the lovers. Maya the reader informed me while this could mean something was about to happen in my love life, the lovers’ card was often also called ‘choice,’ referring to the fact that there might me a moral choice in my life soon enough. The reader wore a strange expression on her face as she said this, as though she was fairly sure it was going to be the latter. To see me off, the left me with the foreboding words: “If it does turn out to be a question of morality, it is much safer to do what is right than what is selfish. Heed this warning.”

“What a load of crap!” I complained to Lily as she yet again asked me what had happened.

“I don’t know about that,” she said ominously, “I mean, the last reading seemed to be pretty accurate.”

“Did it?” I asked, but even as I did, so I realised with quite a start that yes, Lily was right.

For a few days, nothing was out of the ordinary. As a matter of fact, I had almost forgotten about the tarot reading, brushing the first time off as a coincidence. That’s when it happened. I didn’t mean to snoop around, really, I didn’t. But I did, and it led me to the greatest opportunity of my life.

I had been waiting for my colleague Jay so that we could go to lunch together, and we were supposed to meet at his desk. However, he had not been there for some reason, and I had got bored of waiting. As a result, I skimmed my eyes over his desk trying to pick out anything interesting, when I noticed he had left his computer unlocked. A naturally curious person, I went on his browser to see what kinds of things he looked up online. Though, something caught my eye before that. He had a tab open, with the 3D model of an engine. Upon further inspection, I realised this was the most beautiful and elegant design for an engine I had possibly ever seen. This could get someone from our rank a triple promotion! Without really even thinking, I swiftly pulled out my phone and snapped some pictures. After I had done this, I seemed to shake back into the reality of what I had just done, quickly closed the tab and went back to waiting by his desk. When he arrived, I didn’t mention a word of it to him.

At home, I got the model down quickly enough by myself. I was too, after all, a good engineer. I made a few tweaks of my own, and soon enough, it was perfect. I jolted with the realisation that if I sent this into my seniors, I would be a company legend. But I couldn’t just steal Jay’s work like that, could I? Although, I argued, I had made the decision to join this company against staying loyal to my friends at the bookstore and that hadn’t failed me, so why should this? I ignored the nagging sensation that told me I shouldn’t send the email claiming Jay’s work as my own. I shouldn’t, because it would be so wrong, but I did. What was possibly his life’s work, I had just stolen.

The next couple days passed by in a haze of congratulations directed towards me, alternating between being for the alleged invention of a spectacular engine, and getting the predicted triple promotion. The guilt in my stomach made me think it wasn’t worth it.

They threw me party that evening. Jay wasn’t present. He wasn’t the type to scream and shout at people, even upon utter betrayal, and he wasn’t the type to claim his own credit. If anything, that made me feel worse. But I couldn’t own up to it. I knew I had condemned myself to a career built on lies, and so did Jay. He would probably go on to invent something even more praiseworthy, whereas I would likely never come close to his level. The party didn’t seem real. All the smiling faces around me felt more mocking than anything. Like they knew. To get away from it all, I went to the bathroom and stared at myself in the mirror. Though what stared back at me was not my reflection. It was blurred, as though covered by a layer of thick fog, and the only clear parts were in the shape of swords. Three swords. Their hilts all pointed up, their tips all pointing to one spot. To me.

Spooked, I quickly excused myself with the lie of a stomach bug rolling off my tongue and took a cab straight back to my apartment.
The following day, I was back at the tarot centre. As I entered the room, there was a thick silence, none of the easy banter of Maya the reader. It was as though she knew exactly why I was here. I sat down.

Wordlessly, she got out her deck and placed it on the table. Her expression was unreadable, but it showed a tone of hostility. The lady, her face shrouded as ever, once more turned over a card. And this time, it showed a picture of three ornate swords, gleaming in the candlelight.