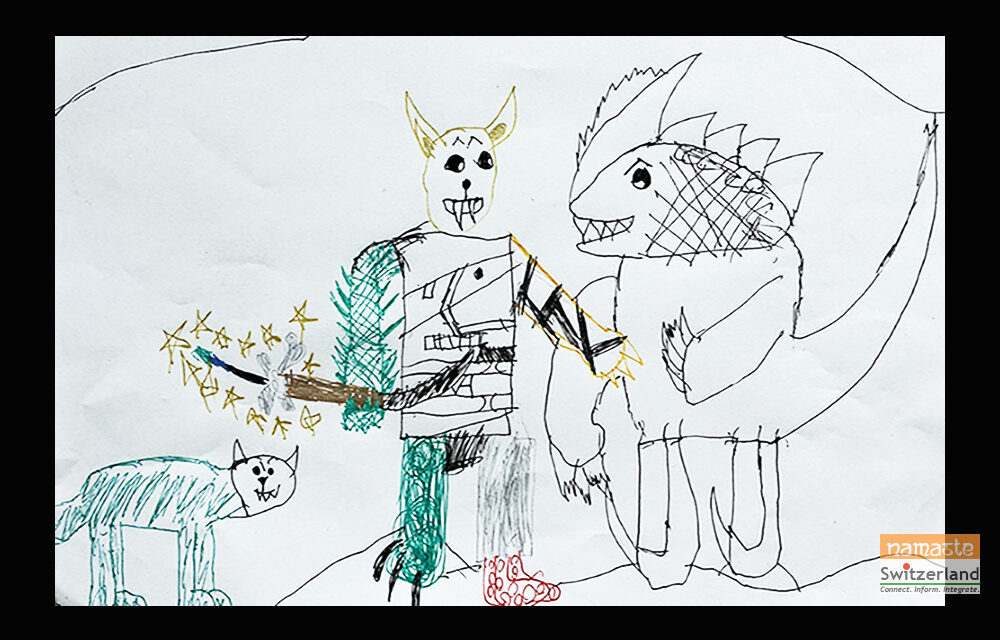 Chapter 1: The Beginning of the journey

Once upon a time, there was a creature called Grimcodile. Yes, a creature is what we will call him. That’s the best name for him. You’ll see. Now, another thing about Grimcodile… He had a pet named Crosser, who was a green panther.

Grimcodile had three main strengths – fighting skills, magic and speed.  He was also very smart. Even though he was so powerful, he looked very odd. His right arm was the arm of an alligator, his left arm was that of a tiger’s, his right leg looked like it belonged to a dragon and his left leg was that of an elephant’s with a foot that looked like it belonged to a squid. And his body? Well his body was made of armour.  Despite his odd appearance, Grimcodile was good natured.

One day, when he was practicing his magic in a cave, several rocks fell down and he was trapped there along with his pet panther. He couldn’t even use his magic to get out. Suddenly, a portal appeared in front of him. Grimcodile had no choice. He took Crosser with him and they entered the portal.

Grimcodile and Crosser landed in the skeleton dimension. There, Grimcodile met his good friend, the Dragon Master.

Dragon Master said, “This place is very dangerous. We need to get out of here immediately!”

“I know! But how? My magic doesn’t even work in this dimension. We’re doomed!” Grimcodile said.

“Then we have to find a way. It’s our only chance,”Dragon Master replied.  Grimcodile nodded. They took Crosser and started their journey.

First, they reached the Forest of Doom.  No sooner did they enter, one of the deadly creatures of the forest appeared. It was Gorilla Godzilla.

Grimcodile and Dragon Master collected the ingredients needed to brew the magic potion. These were:

They started to brew the magic potion. It turned very hot and bubbly, very quickly. Gorilla Godzilla was slowly starting to wake up. “If each one of us drinks 30 milliliters of the magic potion then we can become even more powerful”,  Dragon Master said.
Grimcodile, Dragon Master and Crosser drank the potion. The smell of the brew had spread all around The Forest of Doom by then. However, it didn’t make Gorilla Godzilla, who was fully awake then, run away.

But then, they saw something else.