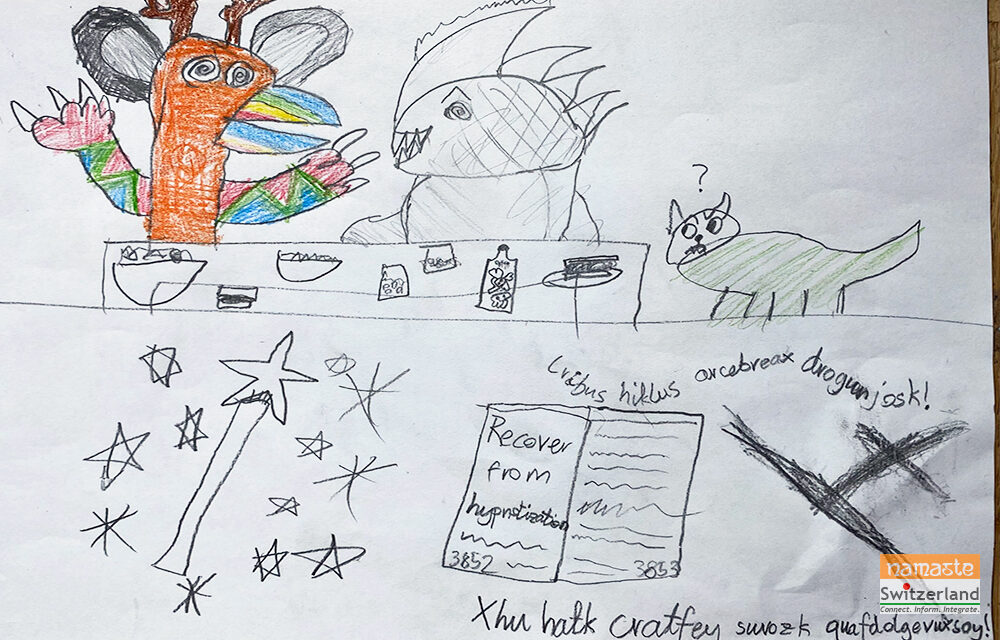 Soon it was night and everyone fell asleep. In the morning, they had the worst breakfast ever! It was so bad, they almost had to throw up. There was rotten cabbage and dead wizard tiger crab sandwiches and porridge made out of hedgehog spikes and snail shells. As for drink? There was poisonous panther ant juice.

Grimcodile hadn’t been hypnotized because he had not tried the food yet. He knew a magic spell to stop the hypnotization, but there was a problem: Grimcodile couldn’t use magic in the skeleton dimension. Do you remember this from earlier?

Grimcodile thought for a while. Then, he had an idea. He told Crosser to go to Dragon Master and take his book of spells and his wand. Dragon Master and Spikeydrac were sleeping, so it was going to be easy for Crosser. Crosser did what Grimcodile said.

When Grimcodile got the book of spells he had a look at it. The book had 5789 pages! “Is there really so much to learn about magic?” thought Grimcodile. Immediately, he looked for a page titled ‘hypnotization recovery’. And there it was, on page 3852. There wasn’t any potion needed or anything of that sort. All he needed to do was to say a few magic words with the wand in his hand.

But, in his excitement, Grimcodile had said the magic words a bit too loudly. Loud enough for the soldiers to hear. As they came rushing, Grimcodile panicked. With his face dripping with sweat, he looked for a spell to stop the soldiers. And then he found one on page 3885, ‘Turn into a ghost and pause the world!’ It was a similar spell to the one earlier. He just had to say a few magic words with the wand. He looked at the page and read out “Xhu hatk cratfey suvozk quafdolgevuxsoy”.

For a few seconds, everything went silent. Then everything stopped moving.

Now Grimcodile was a ghost! But the spell only lasted for a few minutes. So, he had to hurry. He slipped through the bars of the jail. The jail bars were magic proof, but they weren’t ghost proof. Then he took the key from one of the soldiers because the world was paused. So that’s why he got away with the key. After that, he opened the jail doors from outside and pulled Dragon Master, Spikeydrac and Crosser out of the jail building. Since he was a ghost, he could also take other creatures through walls if he held them. Then he went in one last time and took Dragon Master’s book of spells and his wand and went outside. At the exact moment when Grimcodile reached out, the spell wore off and Grimcodile turned into a normal creature again. Spikeydrac and Dragon Master were fully healed from the hypnotization.

“Phew, that was close”, said Grimcodile and gave the book of spells and the wand back to Dragon Master, and off they went.